Many readers know that I’m studying for a Master of Public Health.

A key focus of many of my subjects has been obesity, a massive global issue. The numbers of overweight people have more than doubled since 1980, and this trend is continuing. The World Health Organization estimates that the number of overweight people is expected to increase by 50% by the year 2015, and it is estimated that 51% of the population will be obese by 2030. This is scary stuff.

Of particular concern is the number of overweight and obese children.  In 2010, more than 40 million children under the age of five were overweight, and in Australia the obesity rate for children increased from 5% in 1995 to 8% in 2007-08. The Australian Bureau of Statistics estimates that obesity costs Australia about $58 billion a year.
Research shows that family habits can provide a strong influence on children’s diet and eating behaviors. In turn, this may have an impact on their weight status. Research also shows that families that eat meals together at the dining table have improved dietary intake. A higher frequency of family meals is associated with a greater intake of fruits, vegetables, grains and calcium-rich products, and negatively associated with consumption of fried foods and soft drinks. Family meals have also been shown to contribute to the development of regular eating habits.
So as part of an assignment, I did a short survey a couple of weeks ago to find out how often people eat home cooked meals as a family. THANK YOU to everyone who replied! A whopping 272 of you!
I expected the results to show that we are eating fewer home cooked dinners, and fewer still while sitting at the dining table as a family.
I couldn’t have been more wrong.
I was really shocked by the results (in a great way!) as 90% of respondents told me they eat a home cooked and healthy meal five or more times a week. I must clarify that “healthy” is up for debate, as I didn’t define what I meant by that, and what some people term healthy may not be. But regardless, I was pretty gobsmacked. 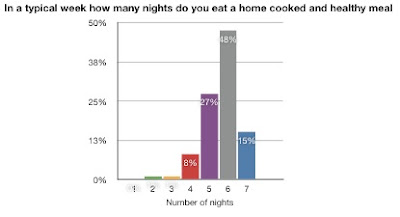 What also really shocked me was when 79% of respondents indicated they ate a home cooked family meal at home with their family at the dinner table five or more nights a week, in a typical week!
All the seasons for this made absolute sense to me – it’s healthier (66.7%), it’s cheaper than eating out or takeaway (62.6%), they are good for us (51.5%), and they love cooking (39.4%). 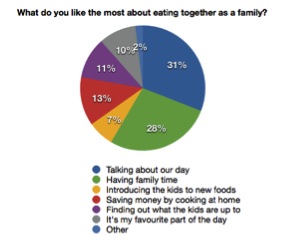 Clearly these results are contrary to the assumption (well, MY assumption) that families don’t eat meals together. Obviously these families are making dinner together a priority.
When asked “what do you most like about eating together as a family?”, 31% said talking about our day and another 28% said having family time. 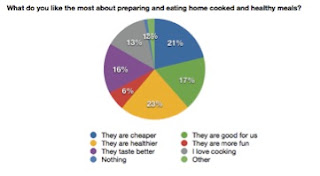 Pretty sure it won’t surprise anyone to say the main thing they hate about cooking is the cleaning up. I hate that too. And as I write this there is an ugly pile of dirty dishes in the sink. And on the stove. And maybe a few in my office… And NO, I will not be taking a photo of those…

So then I thought maybe this was just the people who answered my survey – the fabulous people who follow me on twitter and facebook and LinkedIn and my friends. Until I found the American study, Welch’s Kitchen Table Report, which found almost the same results.

Needless to say, I was impressed.
Even though this didn’t really help with my assignment! I’m just hoping my lecturer will be impressed by how many of you replied. Like I was. And still am.
A massive thanks to everyone who participated – I really appreciate the time you took. Thank you.