I had an absolutely sensational week in Sydney and Canberra last month, filled with beautiful friends, family and of course, food. Oh, ok, there was a bit of drink too.

I went down because late last year one of mum’s friends, Diane, who I am fortunate to also call my friend [after all, she has known me since I was 5!], was in town from Canada for her nephew’s wedding. I booked flights immediately! It was a fabulous few days.

The first day was catching up with a few other friends in Sydney, including fellow food blogger JJ from 84th and 3rd who I talk to often on twitter, and who I met in Adelaide in November at Eat.Drink.Blog3.

One of my cousins, and fellow foodie, had suggested I eat at Kitchen by Mike and the Grounds of Alexandria if I made it to Sydney. As I was staying with a girlfriend who conveniently lives in Alexandria, we had a couple of breakfasts there. YUMMO!

I’m not a butter on toast girl [unless there is vegemite involved, then you can bring it on!], but when I read on the menu at Kitchen by Mike that the butter was Pepe Saya I couldn’t resist. I didn’t actually have quite enough!

It wasn’t just the food I loved at these two cafes, it was the whole package. Both had kitchen gardens with chickens! I assume that at least a few of the eggs on the menu came from their girls, as well as some of the food. Both were also built in converted warehouses and had shops attached. Next door to the Grounds is a fabulous providore, Salt Meats Cheese [where I could have gone berserk. I restrained myself admirably].
Actually, the three cafes I ate at in Sydney all had chickens – the third being Three Blue Ducks at Bronte. Diane and I did the Bondi to Bronte walk and near the end I asked twitter where we should have lunch. Within seconds three people told us we HAD to go to Three Blue Ducks. There are no food pics because we were too hungry to wait [and yes, I just forgot…]. 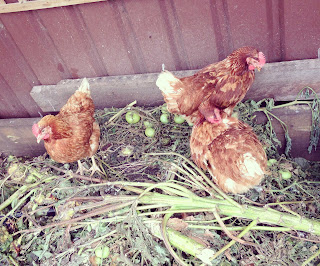 After Sydney was a couple of days in Canberra. Visiting relatives and catching up with friends, old and new. And a visit to the sensational Capital Region Farmer’s Markets. Such gorgeous produce. I will be back!

A highlight was spending a few hours with blogger and twitter friend Liz, from Bizzy Lizzy’s Good Things. She had made a stunning blueberry and banana cake for morning tea – normally I baulk at anything banana but I didn’t want to be rude, so I ate a piece, and nearly went back for seconds. SO GOOD!  However the highlight of this visit [apart from spending time with Lizzy and meeting her hubby of course…] was the freakin’ awesome watermelon and vodka crush with pomegranate. I just helped myself to seconds of this. And maybe thirds. It’s on the menu for the next dinner party.

The other Canberra highlight was a visit to the National Portrait Gallery. I have visited every gallery and museum in Canberra on many occasions [and was even a tour guide at Old Parliament House many years ago…], and my absolute favourite is the National Portrait Gallery. It’s only been open a short time [prior to having its own building it was temporarily housed at Old Parliament House – yes, when I worked there]. Its permanent collection is stunning, and its current exhibition Glorious: A Diamond Jubilee portrait of Her Majesty Queen Elizabeth II is well worth a visit. The centrepiece, a jaw-droppingly beautiful portrait of the Queen is worth the visit alone, and painted by Australian artist Ralph Heimans. As Molly would say, do yourself a favour!
Have you had any great food experiences when travelling? And when you didn’t really expect it?