December is one of my favourite times of year. Not because it’s nearly Christmas (although that is pretty good too), but because it’s the annual fine amnesty at Brisbane City Council libraries. Yes I confess. I’m a library lover who doesn’t always return my books on time. Smacks on the wrist for me.
How it works is this: return your overdue books and take a donation of canned or other non-perishable food. Any overdue fines, processing and holds fees waived in exchange for your donation. This includes any fees you may have racked up over the year. For the record I only have about $3 outstanding. And this was mainly for holds I had reserved.
This year, the library amnesty will donate all food to Foodbank Queensland, a brilliant organisation that distributes food to charities and community organisations who assist those in need. I was shocked to read that each year two million people rely on food relief – around half of them are children. That’s one in every ten Australians in need. Foodbank is Australia’s largest hunger relief organisation, and in 2011 provided over 32,000,000 meals.
So I did a bit of a pantry clean out the other day to find a few things to donate. Mainly foods we rarely eat [and I have no idea how they ended up in my pantry – cans of pineapple, kidney beans and a packet of Uncle Ben’s instant rice].
The next day I saw a tweet from ex-Masterchef, all-round great guy Callum Hann. 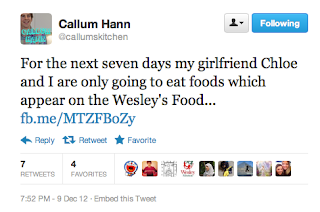 What it said was:
For the next seven days my girlfriend Chloe and I are only going to eat foods which appear on the Wesley’s Food For Families appeal top ten most donated foods.
Wow, how cool, I thought. Then I read the top ten:

Um, good luck Callum and Chloe. I know that would be a massive challenge for me. No herbs, no spices, no sauces, no tea, coffee, hot chocolate, no cereals, no chips! Let alone nothing fresh!

They are doing this challenge to encourage people to donate food, but also to think about what food specifically they are donating. Well, Callum, you certainly made me think about it. I’m going to donate my canned pineapple, beans and rice, but also going to pop down to my local shops and buy some packets of my favourite spices and a few other foods that aren’t on the list to add to my donation.
If you are in Brisbane and want to participate in the amnesty, pop along to your local Brisbane City Council Library between 1-31 December 2012 with your overdue books and a donation of canned food. But maybe go via the supermarket to buy a couple of foods that aren’t on the list.

The Brisbane Library amnesty is also accepting pet food.
To help Callum and Chloe, what meal ideas can you give them from the list above?