I had been wanting to cook a whole salmon on the BBQ for quite a while and decided that Good Friday would be the way to go! We had a friend coming for a late afternoon BBQ, and knowing how much she loves salmon, thought she would be a good guinea pig!

So on Thursday morning I wandered down to Super Butcher at Eagle Farm (yes, they now sell fish – I was intrigued – I thought I’d give it a go as their meat has always been top quality). A 4.5kg salmon later, I was home.

As I quickly realised I had overestimated how many people 4.5kg of salmon would feed, I invited a few others for our Good Friday feast! Yes, it’s very convenient my brother and his family live nearby – and that they are all salmon lovers!

What do to with it was the next challenge. I decided simple would be key.

I (well, hubby) had to de-head Mr Salmon as it was too big for the biggest serving platter I had. A quick rinse later, and he was ready to be stuffed with fresh lemon (from the backyard tree), fresh dill and Italian parsley. I also put lemon, dill and parsley under and on top of the salmon so the flavours would be absorbed through. A bit of pepper, salt and olive oil and it was ready. As I was cooking on the BBQ I wanted it to be well wrapped – I used a layer of non-stick baking paper, then a layer of alfoil.

I preheated the BBQ to about 180c, put the salmon on an upturned roasting tray (so it was a few cm away from the heat), turned off the middle two burners, and closed the hood. Approximately 1 hour later it was cooked.

I served the BBQ salmon with baked potatoes and a couple of easy salads. And of course a few bottles of white wine.

Chickpea Salad
I absolutely LOVE chickpeas – and most legumes – and am determined to eat more of them. This seemed like a good excuse!

Mix all together. Add a splash of olive oil, a splash of balsamic vinegar and some cracked pepper to taste. Mix well. 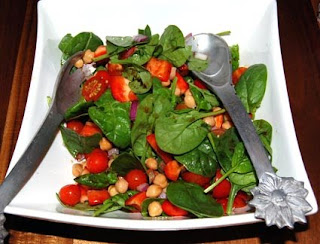 Broadbean, rocket and feta salad
I had a packet of broadbeans in the freezer that I bought to make a feta and broadbean dip. However, as another friend was bringing nibbles, I thought I’d use those ingredients in a salad instead. My sister-in-law Emma gave me the inspiration for this, as she makes practically the same salad but with peas (which I think came from a Jamie Oliver book originally). Anyway, it tasted pretty good, and I’ll now be adding broadbeans to a lot more salads! Even though I underestimated the time it would take to peel them – talk about fiddly!

Place all in a bowl, add a splash of olive oil, a squeeze of lemon, cracked black pepper, and toss to combine. The whole meal was delicious – but as we didn’t even manage to eat half the salmon, I’m looking for some creative solutions for what to do with the rest of it!